Here is an interesting write up from TechCrunch by Michael Arlington of Fox Group is seeking alternative and might terminate the deal they have with Google. Original quote below. 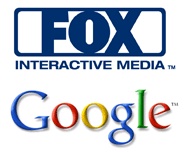 Even while parent company News Corp. continues to try to disrupt the Microsoft/Yahoo merger, Fox Interactive Media (FIM) is rumored to be in negotiations with Microsoft take Googleâ€™s place as the MySpace advertising partner.

The Google-FIM deal, first announced in August 2006, obligated Google to make guaranteed minimum revenue share payments to FIM of at least $900 million based on Fox achieving certain traffic and other commitments. But the original deal was negotiated in extreme haste, say people with knowledge of the deal. In February 2007 the parties were rumored to be working on the final agreement, months after ads were already being served by Google.

In Googleâ€™s haste to keep the deal from Microsoft they may have paid more than they can stomach.

We donâ€™t talk about individual partnersâ€™ performance or anything like that. Now I do want to highlight though, we have had a challenge in Q4 with social networking inventory as a whole and some of the monetization work we were doing there didnâ€™t pan out as well as we had hoped. But we are continuing the efforts and we are still optimistic about future quarters.

â€¦we have a huge amount of social networking inventory, including the MySpace relationship, including of course Orkut, our own network, which is very, very successful and probably like 20 others, or something like that. I donâ€™t know the exact number. But we have an incredible amount of this inventory and in fact, it varies quite a bit in how it all monetizes, based on a number of factors, some of which we understand, some of which we donâ€™t.
â€¦I donâ€™t think we have the killer best way to advertise and monetize the social networks yet. Weâ€™re running lots of experiments. We had some significant improvements but as I said, some of the things we were working on in Q4 didnâ€™t really pan out and there were some disappointments there. I hope to be able to report more progress in the future but itâ€™s a big opportunity because itâ€™s so much inventory.

The vast majority of social network traffic that Google serves ads into is controlled by MySpace – this was a direct complaint about that deal. Shortly thereafter, our source says, FIM started discussions with Microsoft about taking over the advertising inventory. Microsoft announced a guaranteed payments deal with Facebook just two weeks after the initial FIM/Google deal. Iâ€™m sure theyâ€™d be very happy to get their hands on MySpace traffic, too. And if anyone has more money to burn than Google, itâ€™s Microsoft.

What we donâ€™t know is what kind of termination clauses are included in the existing agreement. But Google seems to be saying publicly that they wish they had never entered the deal. Perhaps now, with Microsoft waiting on the sidelines waiting to play sugar daddy, MySpace will suddenly be sexy again.

Very interesting to see if Microsoft/Yahoo would be the right replacement if the deal turns for Google. Keep an eye out.

Social Networking Websites: How to Find Them